European Brain and Behaviour Society and Austrian Neuroscience Association are honoured to announce the co-organization of the Networking Event at the 2022 FENS Forum in Paris.

“Are we equipped to work interdisciplinarily?
On the lack of philosophical education for neuroscientists”

Participation is FREE but, for logistic purposes you must sign up to attend this event.
SIGN UP here »» 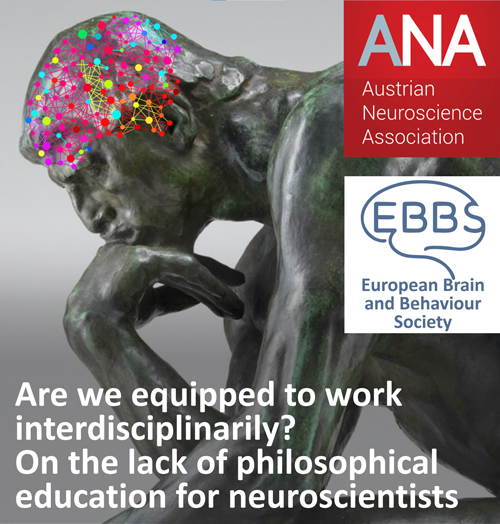 The human brain is the most complex organ of the body, more so, the most complex known structure in the universe. Owing to this complexity, studying its function, anatomy, and development and how it influences behaviour and mental processes clearly requires research at various levels and thus the cooperation of many disciplines.
Despite neuroscientist regularly interact with natural scientists from different disciplines, an exchange between the fields of neurosciences and philosophy has been scarce. This is surprising as neuroscientists and philosophers should be considered obvious dialogue partners due to their common interests in the understanding of cognition, thinking, and the human mind, but personal exchange and collaborative efforts are hardly put into practice. We are convinced that this type of interdisciplinarity will become increasingly important in brain research, also because international funding bodies progressively support particularly interdisciplinary project categories. However, such cooperation necessitates additional capacities and a certain background knowledge, which unfortunately is often not provided by the national and international education programs, Thus, it appears that neuroscience unintentionally limits its own possibilities by disregarding an important area of fruitful collaborations.

How can neuroscientists benefit from extending their expertise into philosophical realms? Philosophical thinking tradition excels in the analysis of arguments, the reflection on modes of justification, and the elaboration of limits of statements or concepts, which can expand the horizon of each neuroscientist.

Sounds too theoretical? By means of concrete examples from scientific practice, we will show how interdisciplinary projects strongly benefit from conceptual and philosophical input. The study of the human brain needs novel theoretical frameworks at the interface between neuroscience and philosophy that, in parallel with technical innovations, will help progressing the field beyond its current limitations. These theoretical frameworks will foster the formulation of innovative hypotheses to understand the complexity of the brain and the mind, leading to the definition of scientific concepts and the critical assessment of scientific assumptions. This will improve the precision and utility of scientific approaches and lead to novel questions and experimental investigations.